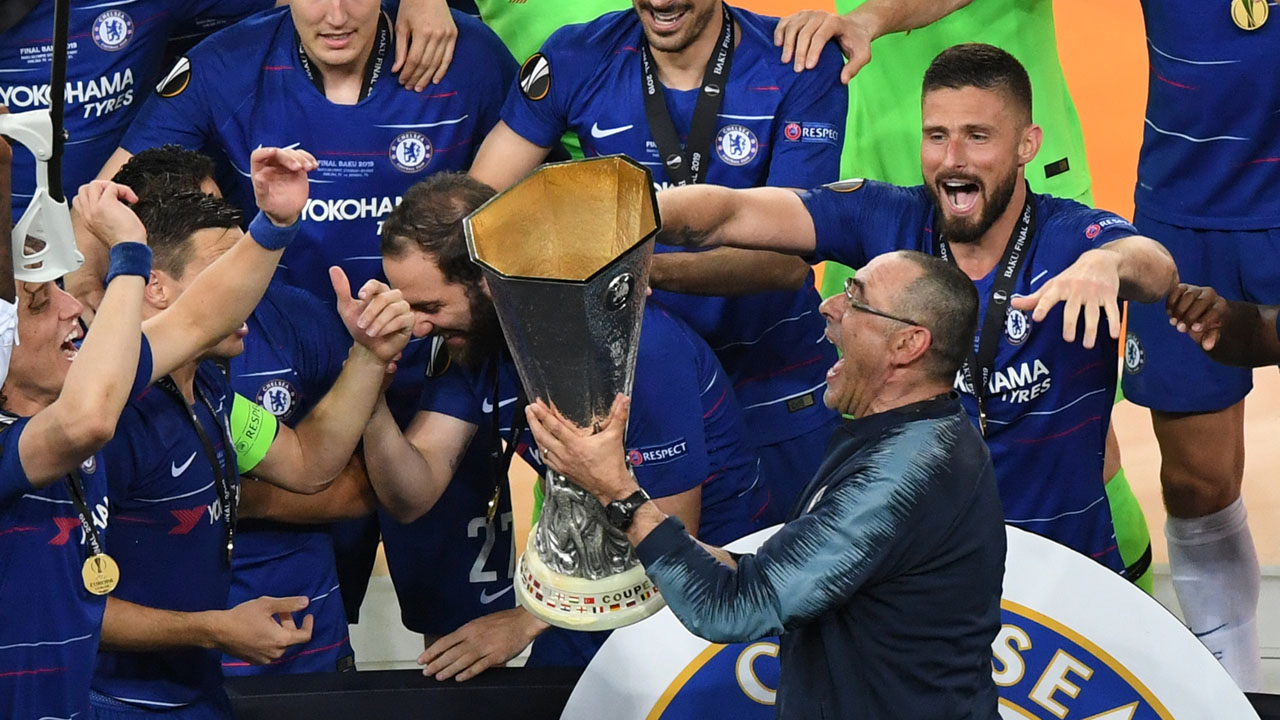 Chelsea’s Italian head coach Maurizio Sarri (R) and his players celebrate with the trophy after the UEFA Europa League final football match between Chelsea FC and Arsenal FC at the Baku Olympic Stadium in Baku, Azerbaijian on May 29, 2019. (Photo by Yuri KADOBNOV / AFP)

Chelsea coach Maurizio Sarri says he is happy in his role, in spite of persistent speculation he is close to a return to Italy.

The Italian is fresh from winning the first major title of his managerial career with a 4-1 win on Wednesday over Arsenal in the UEFA Europa League final match in Baku.

“You know very well that I love the Eglish Premier League, the level of the competition,” Sarri told reporters.

“So, at the moment I am happy but of course I want to know if the club is happy if we can improve.”

Sarri had secured Chelsea’s place in next year’s UEFA Champions League with a third-place finish in the Premier League.

This came before he led the Londoners to their third European title since 2012 in the Olympic Stadium in Baku.

But many fans made it clear they did not like the Italian’s style after a run of poor performances in his first season at the helm.

This had led to reports the former Napoli manager was considering a return to Serie A.

Sarri, 60, said he would speak to top officials at Chelsea —- who have made a habit of hiring and firing managers in quick succession —- in the coming days.

“We need to know what the club can do for me. What I can do better for the club,” he said.

“In a couple of days, we will decide. But I have a contract. So, at the moment we are talking about nothing.”

Sarri also said he had urged his players to be bolder at halftime in the Europa League final, with the score at 0-0.

That was after failing to make much of a dent in Arsenal in the first 45 minutes.

“At the end of the first half I asked my players to play with more courage,” he said.

“We could risk losing but I wanted a team with more courage for moving the ball better and I think that the players did it very well in the second half.”